What is Har Ghar Tiranga Campaign

‘Har Ghar Tiranga’ is a campaign under the aegis of Azadi Ka Amrit Mahotsav to encourage people to bring the Tiranga home and to hoist it to mark the 75th year of India’s independence. Our relationship with the flag has always been more formal and institutional than personal.

Bringing the flag home collectively as a nation in the 75th year of independence thus becomes symbolic of not only an act of personal connection to the Tiranga but also an embodiment of our commitment to nation-building. The idea behind the initiative is to invoke the feeling of patriotism in the hearts of the people and to promote awareness about the Indian National Flag.

Firstly, Check the dates of Har Ghar Tiranga who are keen to commemorate the 75th Independence Day with enthusiasm and pleasure may participate in this event.

Likewise, People may submit their selfies with Tiranga to the website harghartiranga.com and put them at their homes or other locations.

Therefore, we may get the Har Ghar Tiranga Certificate if someone uploads it to the website. 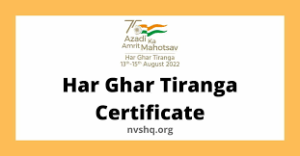 The occasion is called the Azadi ka Amrit Mahotsav, which will be held from August 13 to August 15, 2022.

Firstly, Any Indian citizen is welcome to commemorate this occasion and benefit from the certificate.

People may fly the flag day and night, both at their homes and in their places of employment.

After the specified dates, participants will not be eligible for the certification.

So The Indian government is sponsoring a program in which tricolor flags will be posted from home to home to commemorate the country’s independence.

There are 13 days left until the 75th anniversary of India’s independence. Home Minister Amit Shah has told people to get ready for the girl Tiranga event and tell the world that India has woken up.

India is on track to becoming a great power because PM Narendra has helped the country reach so many important goals. He said that the event of raising the national flag is the only way to get to Naya Bharat.

Minister is using the country in a special way to promote the event by posting pictures with the national flag on social media sites from August 2 to August 15. We also love Venkayya, who designed India’s flag, and the soldiers who died for India. Amit Shah said in his speech that the election campaign is not a government celebration, but a national celebration. 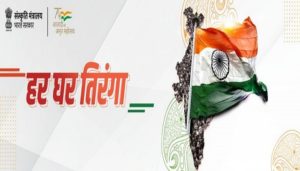 The scheme’s major goal is to commemorate India’s Independence Day on its 75th anniversary so that everyone will remember it.

Eligibility required to get the certificate is:

Click to check more of latest schemes and initiatives by Indian Govt. 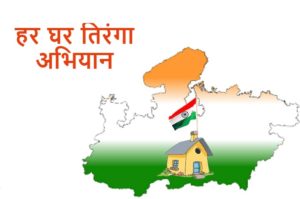 How to Register for Har Ghar Tiranga Certificate @ www.rashtragaan.in

PM urges Citizens to Use National Flag As Profile Picture

Ahead Of Independence Day, the PM urges us to use the national flag as a profile photo on social media.

During Mann Ki Baat, PM of India asked people to post photographs of their national flag on social media between August 2nd and August 15th.

Therefore, by designing the days leading up to Independence Day.  It is essentially just promoting the event Azadi Ka Amrit Mahotsav via the use of social media profile pictures.

Therefore, all people have to use the national flag in their selfie and submit it on the internet.

Mini materials are going to be utilized to produce flags.

According to the official sources, 20 crore national flags will be unfurled on top of residences for three days. “As India completes 75 years of independence, all of us are going to witness a magnificent and historic event.”

Click to check more of latest schemes and initiatives by Indian Govt.